My friend, Jon W., has posted a 360 video view of my exhibit installation, Herencia, at Latino Arts Inc. in Milwaukee, Wisconsin. The show runs through February 6th if you want to see it "in person."

After the big push to get "Herencia" completed and up I'm struggling to stave off post-art-um depression. Been a little under the weather but still trying to keep busy.

"La Llorona" print has been popular. I sold two prints of it in Milwaukee and just got word that the same print on display at Mexic-Arte in Austin has sold as well. Good news. Now if only a few paintings would sell.

My buddy Jon W., at Latino Arts Inc. sent me a link to another review of my exhibit.

A new group show is on the January horizon for my wife and myself at a local college. More info on that as it develops.
Posted by Ramiro Rodriguez at 3:21 PM No comments: 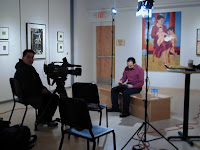 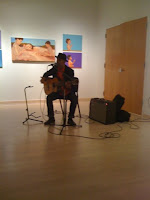 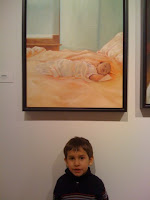 Friday’s drive back to Milwaukee wasn’t the white knuckle adventure Monday was.  The family and I took our time enjoying the cold but sunny weather on the way north.

We arrived at the gallery, I made some last minute adjustments, added the labels to the walls and got some gallery installation shots before people arrived.  L and the boys made themselves scarce while I was interviewed by the local public tv station for their Adelante! show.  The interviewer’s questions were pretty good.  I had to keep reminding myself to look him in the eye and not stare off into the corner of the room as is my habit when thinking of answers to questions about my work.

The tv crew stuck around and interviewed the director of Latino Arts, Zulay Oszkay, while I headed downstairs to join L and the boys having their lunch at the in house restaurant.  I was really too nervous to eat so I settled for a few leftover bites from the boys’ plates and a Dos X to calm myself.  When we made it back upstairs the caterers had set up and people were starting to arrive.  The tv crew recorded a few comments from the first few people who trickled into the gallery.  I’ll be interested to see how their footage gets edited down.

A couple of friends, Gil and Dolores, came up from South Bend, the Jones family drove up from Libertyville and Daniel Aperavich arrived with the news that the new website he’d designed for me was up and running.  A.J. brought a bottle of Patron as a congratulatory gift.  My extended family wasn’t able to make the trek north on a weekday.  I had mistakenly told them all that the gallery was open on the weekend (it’s not).  We’ll have to coordinate a group trip before the show ends on February 6th.

The Lightboy wove his way through the gallery patrons taking pictures with his aunt A.’s iPhone.  I went into the typical gallery opening mode – trying to greet the people I knew, never finishing a conversation and generally feeling discombobulated throughout the whole evening.  José Conde did a short acoustic teaser set to advertise his show on Saturday.  Co-sponsor, Alverno College had acknowledged some of their former students and success stories.  Overall, the reception seemed a success.  Many people expressed their appreciation for the works and a couple even bought some prints.

The week leading up to delivery to Wisconsin had me in a spiraling mass of energy. Spent Saturday the 29 finishing up Hueco and Materia Prima while L framed up the last prints. Sunday was spent packing all the works – wrapping and boxing prints, wrapping paintings, picking up cardboard padding and the truck to haul everything in. Sunday night I packed it all into the truck and prayed it wouldn’t blizzard overnight.

Monday I rode out into a snow storm that didn’t look too bad at first. What worried me was how a 14’ truck would handle in the icy road and high winds. I white knuckled it through most of Indiana (6 cars in the median and ditch within the first 30 miles – including a cop car!) then got to Chicago just in time for the rush. What rush? It took me a couple of hours just to clear the city.

Finally got to Milwaukee and unloaded the truck in freezing wind. I spent the better part of the day unwrapping, laying out and hanging the works. I eliminated a few prints and one painting in the process. The model I had constructed at home made a big difference in helping lay out the space. It looks pretty darn good.

I made the long late night drive back in somewhat better weather. Looking forward to the drive back with the family on Friday. I’ll post some pics and comments sometime after the big event.