I’m hoping making these skeletons doesn’t kill me. Days have been spent on the computer reworking the “Arbol de Vida” image for the 44 cd cover. Evenings have been spent in my garage – cutting, rasping, and sanding boards into bone shapes.

The boys kept trying to coax me out onto the lawn for some playtime this weekend. Took a break to visit with friends at a cookout and catch a movie with the boyos. I don’t know whether it was all the sawdust up my nose, allergies or a combination of everything that gave me a near migraine-sized headache last night. Or maybe there is just too much to do.

Tomorrow night I give a talk to the print class at Goshen College.

Tonight I select and wrap up some prints for a print sale at the University of Illinois @ Chicago’s Student Center East on Friday and at the National Museum of Mexican Art on Saturday. Friday and Saturday I also have meetings with the Consejo Grafico.
Posted by Ramiro Rodriguez at 4:44 AM No comments:

Labels: in the studio Goshen College, National Museum of Mexican Art, The Deal With 44 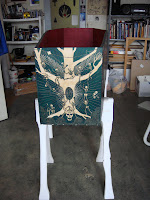 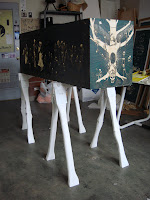 I'm reworking some of the elements of the Dia de los Muertos installation I showed at the Snite Museum back in 2007. I will be showing the ofrenda installation in Omaha, Nebraska next month. More details to come.
Posted by Ramiro Rodriguez at 4:44 AM No comments:

Follow this link for some photos of the "Forma" installation and reception @ Goshen College, Goshen, Indiana.
Posted by Ramiro Rodriguez at 3:12 PM No comments:

I painted the newly carved skeleton limbs for the coffin base last night. I'm still working on a new "huesudo" to go inside the box.

I have works showing in three different galleries that are having openings/receptions this weekend. I have a few prints in a group show at the New Galleries on Lincolnway West in South Bend, Indiana. I have the small color prints on view in Buchanan, MI @ Thomas Jolly Home and Garden for the "Non-Pareil" this Saturday (9/5). And don't forget my reception at Goshen College for "Forma".

Here is the press release for "Off the Press":

September 4 from 5pm to 9pm
Exhibit continues through September 26

"Off the Press"
featuring recent works by regional printmakers

New Galleries on Lincoln Way West is a proud participant in
Downtown South Bend's First Fridays Event.
Posted by Ramiro Rodriguez at 4:44 AM No comments: