Lot’s of prepping and less art making. But it’s got to be done.

Delivered prints to a print show in South Bend @ The New Galleries on Lincoln Way West. Delivering prints to Buchanan, MI for an art walk next weekend. Preparing prints for the Art Fair @ The University of Illinois and the National Museum of Mexican Art in Chicago on September 25 and 26 as part of IUPLR’s Siglo XXI Conference.

I’ve been asked to try my hand at some cd art by my friends in the band The Deal With 44. Working on reworking an existing work to meet the bands needs.

Got a great idea on how to display the Earth Dragon Coffin in Nebraska. I’m busy creating modified papier-maché skeletons and gathering the necessary materials for the installation. This weekend I carved arms and legs out of 2x4” pine. I explained the concept to the Lightboy and he gave a little cringe. I asked him if he thought it was a good idea and he wisely answered “You have to do what you feel is right.”

It was a weekend of visits as well. My eldest brother stopped by and was instantly recruited by the boys for a game of baseball and wrestling. One of my youngest sisters and her family came by to visit and see my exhibit at Goshen College as well. 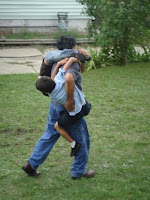 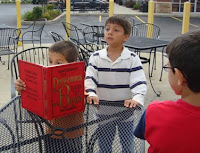 Labels: in the studio Forma, Goshen College, IUPLR, National Museum of Mexican Art, The Deal With 44 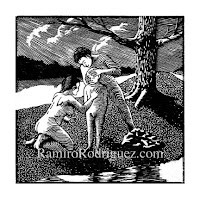 Just hanging ...and not in a non-stressful way. I've been hanging art at work, hanging art at friend's homes, and getting ready to hang my work in Goshen, Indiana.

Realizing just how handy the ol' mini-van was now that I have to make several trips in the Honda to deliver the work. That or break down and rent a van for a day.

I feel good about the show though most of the work has been shown before. I hope someone actually shows up to see it.

Here's a link for the show, gallery hours and map.
Posted by Ramiro Rodriguez at 4:44 PM 1 comment:

My wife and I lent our boys to my parents over the last weekend-plus and spent some time driving to see friends, art, attend Tool concerts and experience Lollapalooza in Grant Park. 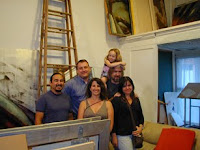 Thursday the first leg of the It’s Not The Heat It’s The Humidity Tour took us to Cincinnati, Ohio where we caught up with our friends Jason Franz, Brigid O’Kane, and their lovely daughter Alexandra. We got to see the great work they are doing running Manifest Gallery in Cincinnati, Ohio. 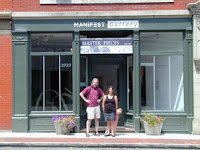 I was happy to see the art work I helped jury for Manifest’s 3rd Annual Master Pieces exhibit. We all spent a good evening dining and catching up with our painter friend Chad E. who always keeps us laughing with his smart ass remarks. We also visited the drawing studio that Manifest sponsors. The space is a great set up with sky lights, new drawing easels and horses. Quite an accomplishment my buddies have created in the community. 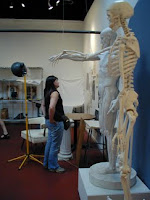 Met up with my brother and family Friday night to see the Tool show at the PNC Pavillion. I got a chance to catch up with Maynard a bit before the show and heard about the latest on the wine making front. I was psyched when MJK informed me that we would have some passes waiting for us in Chicago for Friday’s Lolla show. I was also pleased talk with Adam and to meet Steve Niles. The two had scored some art and sculpture on the road in Canada and NYC. I’ve always loved the 70’s Gargoyles movie. 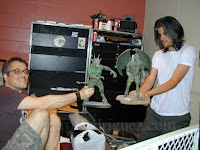 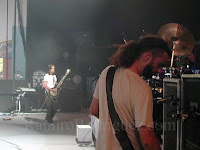 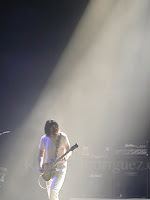 I was able to snap some good soundcheck and show photos with my old 2.1 mega-pixel camera. Aftershow Adam saw the state of my camera and made me a gift of his Sony Cyber-shot (what a guy!) I don’t know what I’m going to do with those 8 extra pixels now? 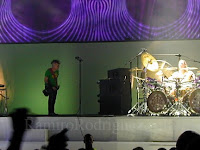 Saturday morning Laurie and I said our goodbyes to J,B & A and headed to Chicago to catch Lollapalooza where Tool was headlining. We had a pleasant surprise when we arrived at will-call and realized MJK had arranged for us to have passes to both Saturday and Sunday’s shows (Thank you!).

I met up with my nephew Adam and we managed to watch the show from the soundboard platform (thanks MaryJo). Tool’s show was excellent. The band was on and Maynard was very animated and talkative. The lasers that had shot over the crowd on Friday night were contained to the stage roof on Saturday. I assume this is to avoid shooting the beams into the city skyline and mirrored buildings to the west and north of the park. The sound and screen visuals were still great nonetheless and there’s nothing like 55,000 Tool fans singing along with Vicarious! I wasn’t able to shoot any photos because the camera wasn’t charged but it was fine anyway as I was able to concentrate on the show and the vibe. We hung out backstage after the show and talked to some people we hadn’t seen in a while then made the crazy trek back home for the night.

Sunday we headed back to into town to catch some more ‘palooza. Cage the Elephant, The Vampire Weekend, The Raveonettes, Lou Reed and Jane’s Addiction were the stand outs for me. Low point had to have been the frightened 6 year old standing with the trashed out dad lying in the grass in the middle of the crowd. Made sure someone was looking out for him. Tried to give him my ear plugs but someone had already gotten him some. Sometimes I don’t get people.

Decided to drive through and head to my parent’s to wake up with our boys. Watched a spectacular lightning storm staying just ahead of us as we headed north into Michigan. Spent a gorgeous morning/afternoon playing in the yard with the boys and their cousins. The sharp little eyes found some tree frogs, toads and various insects while they raced around and swung from the trees. Life’s good. 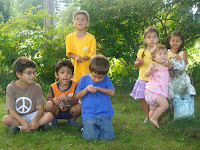 Posted by Ramiro Rodriguez at 4:44 AM 2 comments: