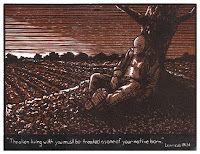 This is a print I have created for the Consejo Grafico’s latest portfolio entitled “Borrando la Raya/Erasing the Line”. The portfolio will consist of images dealing with immigration. My contribution is a 9 x 13” color linoleum block print entitled “Fallecio el Señor Urbano Ramirez” (Mr. Urbano Ramirez died).

The idea for the image came about after I heard Mr. Baldemar Velasquez, President of FLOC (Farm Labor Organizing Committee) speak at an award ceremony honoring my father, Maximino Rodriguez, with the Cesar Chavez Tri-Community Award.

Mr. Velasquez told the shocking but now all to common story of Urbano Ramirez Miranda, who died in a field in North Carolina and was not found until 10 days later. Undocumented = cheap & expendable labor.

Within his talk Mr. Velasquez, an ordained chaplain, spoke of his search through the bible for passages that deal with the treatment of the alien/immigrant among other people. He found three passages that spoke to this subject - Exodus 22;21, Numbers 15;15, and the one of which I chose to use as a footer to the image. The passage is from Leviticus 19:34 “The alien living with you must be treated as one of your native born.”

The portfolio featuring various artists from talleres(printshops) in the Consejo Grafico should be available for sale and exhibition early next year.
Posted by Ramiro Rodriguez at 4:44 AM No comments:

Update: The show has been extended to run until February 19, 2010.
Posted by Ramiro Rodriguez at 4:44 AM No comments: