Someone once said something to the effect – With a blank canvas your options are limitless. With each successive mark your options narrow down....


LatinoArts has been asking for a title to my exhibit in December. I agonized over choosing something that could encompass the ideas behind what I intend to show. Last week I decided on Herencia, after the 1996 wood relief print by the same name. I like this Spanish word because it can mean heritage, inheritance and heredity. Along with the title came a new clarity and focus as to what I want to see and what needs to be done with the works currently underway. The theme that has been emerging in my recent works comes from the idea of carrying one's history around at all times. This history includes all the ancestral memories and life struggles that converge into creating who one is today. The past's constant informing of the present and the future. More on this at a later...

Last night, with a handshake and a partial payment in hand, I committed to have an edition of the coffin prints ready for a patron within the next few weeks. He, my wife and I figured out a framing and hanging configuration that is going to look fantastic.

The display of the printed portion of the coffin has always been a concern to me even as I was carving out the piece. The first concern is how to display six pieces of printed paper to appear as one continuous image. The second is how to frame such a long image in the best manner possible. Most people do not have a 16' stretch of wall to display the print as intended - a continuous image that makes up the Olmec Earth Dragon's body. When I first displayed it at the Snite Museum I overlapped and pinned the individual sheets to the gallery wall.

Last night we came upon a configuration that should work. The piece won't be continuous but certain sections will be framed together in four separate frames and double hung on a wall. The top section will have the male and female, sun and moon skeletons flanking the central Earth Dragon face in one frame. The bottom section will have the two 54" side panels flanking the Tree of Life panel. Each will be in its own frame. Very cool.

During the time it took me to get these thoughts down two significant things came to my attention.

My dear friend marks the 5th anniversary of his mother's passing on his blog and one of my musical heroes, Trey Gunn, blogged about some similar ideas at his myspace page.
Posted by Ramiro Rodriguez at 4:44 AM 2 comments: 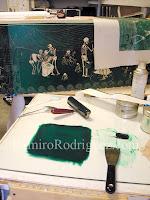 What have I been up to?

L and I traveled to Grand Rapids, Michigan to frame and install the Zapopan – GR Sister Cities Exhibition. The work looked great and all were happy with the installation.

At the studio, I’ve been finishing up printing the editions of 3x4” color prints, building more canvas stretchers, stretching and gessoing canvas, shooting reference photos, reworking the coffin images and printing up the sides.