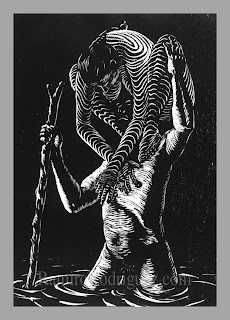 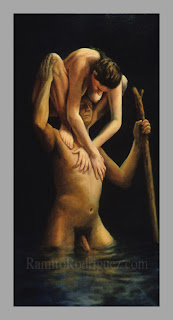 “Crossing(Loa)” is an example of the cross pollination that began to occur between my paintings and prints in 1994. With scraps of birch plywood from my day job I began to make prints in my Cincinnati apartment. I was without a studio, proper ventilated area or means to continue painting. I began experimenting with techniques on the wood to see how I could find an adequate means to reproduce the images I had in my head. I decided to re-examine and re-interpret a couple of painting images in print form to see how they stood up. “Crossing(Loa)”, “Almus”, and “Earthdiver” were some images that got the re-examination treatment. Some print images, like “Fire”, “Repression”, and “Whisper” eventually worked in the opposite direction and became paintings.

The painting, “Crossing (coyote)” has always been one of my favorites. That painting combined quite a few ideas I had floating through my head at the time: genetics, gender relationships, heritage and history. I remember the original idea came from the serendipitous melding of a book I was reading and a song lyric. The book was Maya Deren’s “Divine Horsemen: the Living Gods of Haiti” and the song was “Kiss of Life” by Peter Gabriel. The lightbulb went on when I realized that part of the song, like the book, was describing an important aspect of Haitian Vodou religion rites. The image that intrigued me was based on practitioners’ belief that the Loa (intermediaries of the deities) mount (possess) the ritualist and “ride” him/her as a rider rides a horse. The literal interpretation of this image intrigued me and I set about sketching different ways of presenting it. In the meantime many other associations of “crossing” began to enter my mind as I worked out the specifics of the composition. Once again the St. Christopher reference is present but the piece also playfully nods to the story of the scorpion and the frog, my cultural heritage and my family’s migration (hence “coyote”), as well as, a visual pun for x and y chromosomes.

When it came time to re-interpret the painting as a relief print I resorted to the use of cross contour lines, as in “Chasing Thoughts…”, to describe a figure. I wanted a clear distinction between the two figures in order to imply the “otherworldliness” of the Loa. The concentric flowing lines creating volume in the female figure become a nice contrast to looser sketchy lines describing the male figure. I wasn’t concerned with the mirroring of the painting’s direction that occurs in the print. This is the clear connection of having drawn the block in the same orientation as the painting and then having it print in reverse in the transfer of ink to paper.
Posted by Ramiro Rodriguez at 3:35 PM