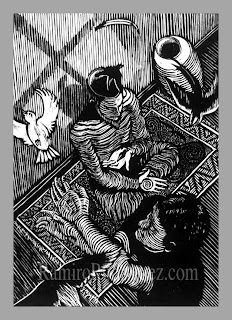 I tallied up the votes from my myspace friends and had a tie in the last four prints people wanted to know about. So, instead of a "Top 10" you'll get a "Top 12". I'll begin with number 12:

In the winter of 1993 I had just completed graduate school, had no studio to paint in, and little money to my name. At Christmas time I wanted to make something for my family in lieu of having to buy presents. I had scrap wood I’d salvaged from the arts center I worked at so I decided to make a relief print that I could print by hand in my apartment. My first attempt was “Volador” which I loved, however, it’s 18 x 24” size was way too much work to print by hand in time for that particular Christmas. “Chasing Thoughts…” was the second and smaller attempt.

The idea for making prints instead of painting meant a change in my method of working. I wanted the prints to be radically different in process from my standard way of working. I didn’t want to spend many hours and days making studies and references for life like accuracy. I wanted the pieces to be immediate and not necessarily true to life in subject matter and presentation. I wanted to go with an initial impulse with little editing. I also chose to work from memory in describing the figures and environments. Dreams, memories and out of context ideas left in sketchbooks were to be the source for images.

The initial idea for “Chasing Thoughts…” came from a dream I had in which a guru-like man was talking to a group of people on the second floor of an apartment house. He sat cross-legged, with his back to a wall, while many people sat in front facing him. As he spoke to those gathered around I was stuck outside on the balcony peering in through the sliding glass doors. An old friend came up the stairs intending to sit in but we began to talk and catch up instead. In the end, we both missed the discussion.

The rest of the dream unfolded in a dramatic way until I awoke. The rest of the day I carried on at my job but couldn’t shake the persistent memory of the dream and a feeling that I had missed out on some really important message being transmitted by the guru-man. At some point during the day a song came on the player that suddenly locked together with the dream residue and formed an immediate image in my head. The song was “Secret Journey” by the Police. The whole song resonated with my feelings associated with the dream but the line that got me was:
“…And on the days that followed
I listened to his words
I strained to understand him
I chased his thoughts like birds…”

Most images I work out take hard effort to come up with, but every once in a while an image presents itself in an almost fully realized way. This image was one of the latter. I envisioned a literal interpretation of the song lyric, saw the figures, saw the birds emerging from someone’s head and I saw the vantage point. I made a quick notation in my sketchbook so as not to forget it and waited anxiously to get home in order to work it out on the block.

Once home I drew out the image on a block in pencil and prepared to carve. At once, the problem arose as to how to represent the figures as volumetric forms with only line to work with. For the longest time I had been working predominately in paint where I could blend and glaze to create volume. Representational relief printing had always seemed so flat and boring to me when I studied in school, which is one of the reasons I avoided it. I recalled my love of M.C. Escher prints and how he used contour line to magnificently describe objects. I knew this was the way to go for me as well. I would use the weight of line and cross contour to give me the volume, dimension, and patterning that I sought. I also included stipple marks as a contrast to all the linear and planar forms. I love to play at contrasts for a fuller range of possibilities: black and white, curve and straight line, flat and volume, chaos and order, movement and calm, etc.

The bird’s eye view composition is based on a spiral superimposed on an intersecting diagonal structure. My intention was to keep the viewer’s eye in constant motion from one side of the picture plane to another and from the outside to the “bird in hand” and back out again.

I am really pleased with the result and my family was too. Initially I printed up 25 prints for my family on a tableau paper. I later printed up a second edition of 25 on Sumi paper that I have available for sale on my website: RamiroRodriguez.com.
Posted by Ramiro Rodriguez at 3:11 PM