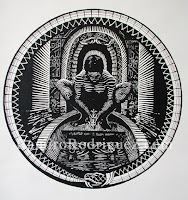 As with a few of my other images, “Fire” was later reinterpreted into the painting “Bloom (Isis)”. But that’s another story…
Posted by Ramiro Rodriguez at 4:44 AM

I love the way the TOOL members work regularly with other artists like you, Alex Grey, Chet Zar etc. It participates in making their universe so special, unique, complex, rich and fascinating.

It's interesting to see how different arts mixing together create an entity. That's what makes TOOL such a special band, the music is amazing, but the band can't be reduced to music, it's so much more than that.

I discovered your work thanks to them a while ago and I really love what you do. I really wish I had more money to buy TOOL's merchandising as well as some prints from you ! Someday maybe...

I actually have this shirt! It's my favorite tool shirt, which i have many of by the way. I'm actually pretty protective of it as I am also aware that they are no longer in print. Adding the ouroboros was a great idea!

AWesome shirt, I also have one and know its value. I am planning on getting the Ouroboros tattooed.